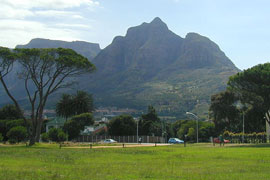 Rondebosch is one of the first Southern Suburbs of Cape Town and is bordered by the suburbs of Newlands, Rosebank, Claremont, Rondebosch East, and the slopes of Devil's Peak. It is primarily an up-market residential suburb, with a medium sized shopping area and a small business district. It is best known for its excellent schools and for the University of Cape Town.  The main campus of the University of Cape Town, which is nestled beneath the slopes of Devil's Peak, is one of the country's top universities. The historic Groote Schuur estate located in Rondebosch includes both presidential and ministerial residences and have Cape Dutch origins.

The centre of Rondebosch is the Main Road, with the Victorian cast iron Rondebosch Fountain being a historic landmark. The area is currently being revitalised as 'Rondebosch Village'. Historic buildings in the area include the library (formerly the town hall) and St Paul's Church which was designed by Charles Michell. The home of Simon van der Stel, first governor of the Cape Colony, is now part of Rustenburg Junior School. This building dates back to the 17th century, although it has undergone many alterations over the years. Its summer house, dating from 1760, remains as a monument just below the university. Rondebosch Common, once a military camp ground, is declared a national monument and is also an important fynbos conservation area. The Baxter Theatre in Rondebosch is Cape Town's second biggest theatre complex, after the Artscape Theatre Centre in the city centre.

For accommodation or any enquiries, please contact us at any time.

Posted by Rondebosch Manor at 04:00